KATIE Price’s son Junior has followed in his dad Peter Andre’s footsteps as he prepares for his first ever meet and greet.

The 16-year-old said he was over the moon to share his new tracks with his dedicated and loyal fans.

But first wanted to sample the tunes on a small group of his followers at a meet and greet on Sunday.

“Guys I’m getting ready to release my music soon and I would love you all to hear it,” Junior wrote.

“So five of my followers can come and meet me at a secret location to listen to some music.”

The talented youngster said that the lucky fans would be selected at random and would be joining him in London for the day.

“Be available and able to make your own way to London this Sunday (March 20). Anybody under 16 must be accompanied by an adult, and winners will be picked at random and notified on Friday,” he continued.

The chuffed singer added: “It’s my first ever meet and greet! Excited to see you all.” 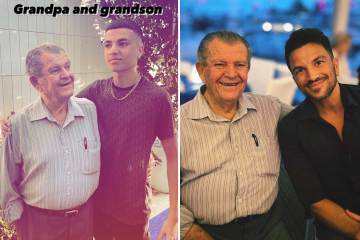 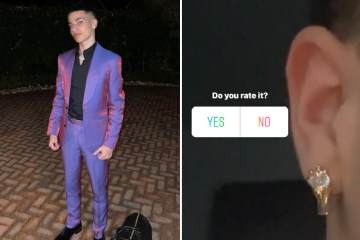 Over the past few months, Junior has teased the release date of his new music – leaving scores of fans desperate to hear the teen’s musical debut.

Last year Junior revealed that he that had signed a mega record deal and in October he pulled an all-nighter shooting the video to his first single.

Most read in Celebrity


Celebrities who regret cosmetic surgery – from Bella Hadid to Molly-Mae


We're on edge of WW3 but Kim, Kanye & Pete only care about own pathetic war

Junior hit the streets of London to film the music video for the song which seems to be called, Just Two Drops, and worked hard until the early hours of the morning to get it done.

He was spotted being filmed talking on his mobile as he walked down the street flanked by two guys sharing a takeaway.

Junior shared his exciting music news last summer, telling fans: “Wow.. where do I start. These past 6 months have been hectic. But I’ve loved every single second of it,” Junior wrote.

“My dad took me to the studio 6 months ago and got me in the booth at @rebelrecs. Since then, I have secretly been working on a MASSIVE project, and not long ago got a call saying @columbiauk want to sign me!

“I would just like to say thank you to the team @rebelrecs alongside my dad who have helped develop me into an artist.

“And of course a big shoutout to @sktartist and @marcellonoego who are very talented and have been working with me on this project since the start.”

Junior also made sure to thank mum Katie, 43, who he said was “always supportive of me.”

The record deal may not come as a surprise to some after Junior joined his dad on stage in front of thousands of fans at the Fantastia festival in Maldon, Essex, where he flexed his vocals.

Junior’s dad is of course famed for being a popstar in the 90s, thanks to his huge hit Mysterious Girl.

Katie is also a keen singer and even performed at Eurovision, but hasn’t had quite as much success.

We pay for your stories!

Do you have a story for The Sun Showbiz team?

We pay for videos too. Click here to upload yours.

No Related Articles Found
Previous articleMum-of-two, 29, caught drink-driving tries to avoid ban by claiming she had ‘separation anxiety’ from her baby son
Next articleI’m a mum-of-two and have mini fridges for my kids full of snacks to save time, people say it is too much but I love it